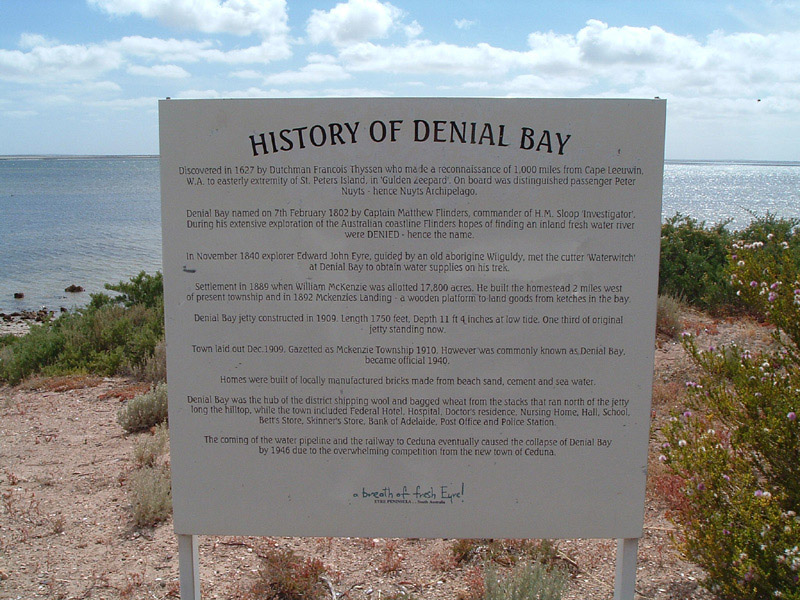 Located some 14 kilometers Northwest of Ceduna, Denial Bay in South Australia is one of the must-see stops if you’re going to journey across the Nullarbor. As a small tourist village that specializes in fishing, it offers a refreshing and stark change of scenery to the endless salt bushes.
It is part of the Western Eyre Peninsula, towards the Nuyts Archipelago. Its chief industry is its massive oyster farms, seen as some of the largest in the peninsula. This is the bay’s main attraction – it draws tourists to their oyster farms and oyster specialty dishes.
Brief History
Denial Bay has a long history entrenched in European influences, reaching all the way back to 1802 when it was first mapped out by Matthew Flinders during early attempts to get an accurate estimation of the coastline within South Australia. Flinders reportedly named it “Denial Bay” due to what he claimed was “the deceptive hope [they] had formed penetrating by it some distance into the interior of the country.”
William McKenzie established the first major settlement there in 1889; it began as a port and ship landing which brought farming produce and other livelihood necessities in and out for the settlers of the area. It was then known as “Mac’s Landing”.
The area was well known for its ingenious setup of transporting and loading wheat and farm produce. At low tide on the beaches the wagons were driven out to the ships landing, which on the change of the tide would become a platform surrounded by the sea. Produce was then loaded for export to Adelaide. To this day, you can still see wheel ruts from the wagons worn into the limestone, towards the original ship’s landing.
At present, the bay no longer functions as a port, and has been overtaken by Ceduna as a major settlement and host to local shops, services and accommodation. Oyster farming has instead become their most flourishing trade and growth industry, thanks to its waters unrivalled clear waters that are absolutely essential to farming high quality oysters.
Sights and Bites to Look Out For
Pacific Oysters
Travellers are encouraged to sample the locally-grown Pacific oysters, which are freshly harvested and can be purchased from numerous local growers within the area of the Denial Bay township. Some local growers even give travellers tours of oyster nurseries, explaining how the process of farming oysters is done.
The Denial Bay oysters experience is delicious, nutritious, and also educational. It’s ideal for families who want to add a little learning for their kids on the trip, teaching them about marine life and where the oysters they eat come from.
Blue Swimmer Crab
Another fantastic creature to look out for in Denial Bay’s waters is the well-known Blue Swimmer Crab. The Portnus Pelagicus can be found at the Southern coasts in Western Australia, and it is in vast abundance in Ceduna and Denial Bay.
Even tourists from outside of Australia visit this spot to spend time “crabbing”. As the crabs are so plentiful, these delicious animals can be caught right from the jetty bay, using some of the specially-designed crab nets that can be found in the fish and tackle shops within Ceduna. All you have to do is put a little bait in the net, cast it into the water, and wait for the crabs to come and take the bait!
It’s an incredibly rewarding and fun activity, particularly for travelling groups of friends and family exploring the Nullarbor. Children will be especially fascinated to be able to fish out their own crabby dinner from the bay waters.
From a rich cultural history to its diversity of marine specialties, Denial Bay is one attraction you shouldn’t skip on your Eyre Highway Trip. To find out more about great tourist stops and Nullarbor accommodation options browse our site: http://nullarborroadhouse.com.au/