The Bunda Cliffs – Geological Marvels in Nullarbor and More 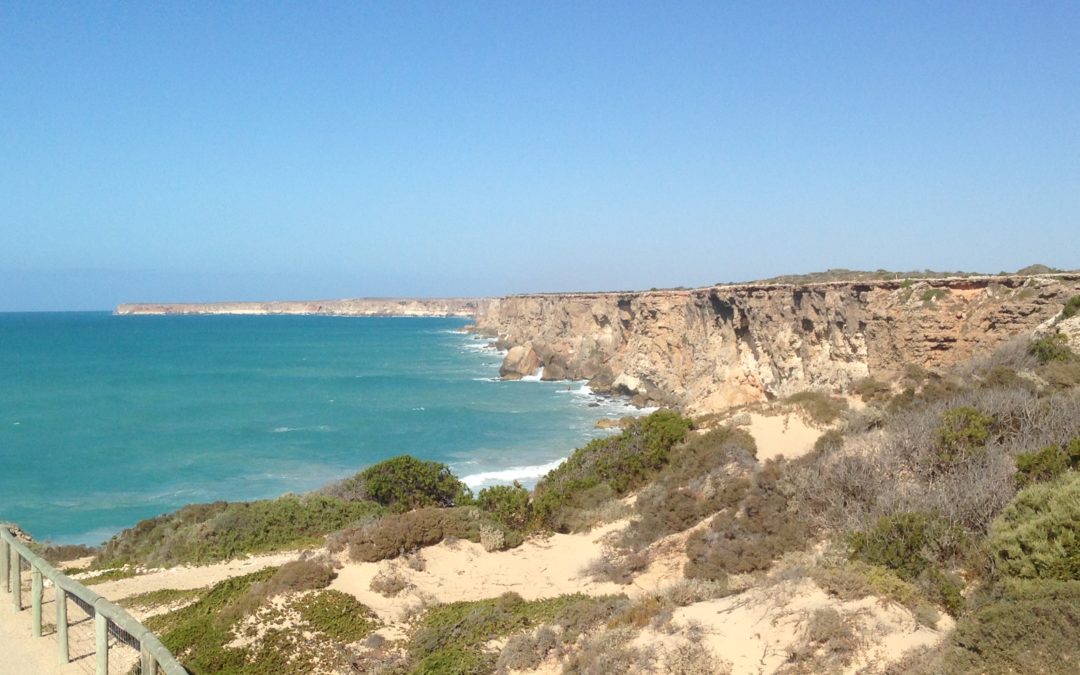 For many travellers, visiting the Bunda Cliffs – located 20kms east of Nullarbor Roadhouse – makes them think about how Australia drifted away from Antarctica around 60 million years ago. There’s just something about the site that encourages such thoughts; for starters, the cliffs show a clear demarcation of where the continents broke off, and the ancient geological wonder is decorated with layers of impressive marine fossils.
With an area of 240,000 square kilometres, it’s the largest continuous sheet of limestone in the world. The bottom layer of the ‘Wilson Limestone’ is chalky white and 300 metres thick, while the middle layers are grey and brown, with crystalline rocks and fossilised molluscs and worms.
You can also look out into the majestic Pacific Ocean from five viewing points, the most popular one being at the Head of the Bight. During whale season your eyes won’t know where to look; left to the whales and their calves or right to Bunda Cliffs.
More Attractions at the Cliffs
Once you’ve take in the scenery, you can also try these activities at the Bunda Cliffs.
1.       Whale Watching– The cliffs are also a perfect site for whale watchers. You can spot whales by the hundreds from May to October each year at the Head of the Bight (http://nullarborroadhouse.com.au/whale-watching-head-bight-nullarbor-at…). On land, you’re sure to come across herds of wild camels, dingoes, southern hairy-nosed wombats, and shingled lizards.
2.       Visiting a conversation area – For some downtime, you can head off to the Eyre Peninsula, located southeast of the cliffs. It is home to several protected areas, including the Point Labatt Conservation Park, where the largest mainland breeding colony of Australian sea lions live. There’s also the Whyalla Conservation Park, where you will find more than 80 species of native birds such the white-bellied sea eagle and the peregrine falcon.
3.      Cage diving with the sharks – For those adventurers brave enough to try, you can swim with dolphins, or spend 30 minutes in an underwater cage surrounded by sharks. All you have to do is book with an ocean wildlife adventure company that will take you to Port Lincold on the lower Eyre Peninsula. Rates average $75 AUD, which includes a wet suite and video documentation. (If you’re up for the challenge, that is!)
Getting to the Cliffs
Heading to cliffs by car is fairly easy because of the paved path of the Eyre Highway. There is multiple viewing areas, with one of the most popular being at the Head of the Bight. 20kms East of the us (Nullarbor Roadhouse) is the turn off for the Head of the Bight.
If you need more information on how to get there – or if you need a place to stay after a day at the Bunda Cliffs – feel free to contact us (http://nullarborroadhouse.com.au/)! We will gladly advise you on map directions, wildlife tours and geological attractions for a memorable road trip.
References:
Kaushik. “Bunda Cliffs in Australia: Is this the End of the World?” Amusing Planet. 11 May 2013. Web. 26 August 2014.
McConahay, Shari. “Bunda Cliffs: A Geography Lesson” Budget Rent a Car Australia Pty Ltd. 10 March 2014. Web. 26 August 2014.
Nullabor Traveller. “Day 2 – Cage Dive with Great White Sharks.” n.d. Web. 26 August 2014.