3 Amazing Plants That Thrive In The Nullarbor

Nullarbor, in Latin, means “no plants”. At a glance, it looks as though nothing would ever come close to surviving let alone thriving in the Nullarbor. However in actuality close to 390 species of well-adapted plants, 9 of which are of conservation significance, call the Nullarbor Plain home.

As much as we’d love to chat about all 390, we’ve singled out 3 that we reckon are pretty special.

The Quandong is a tall shrub (2 to 3 metres) and is widely dispersed throughout the deserts of Southern Australia. They have ovate leaves, with a rough, dark grey bark. The Quandong flowers appear on its stems, green or white on the outer parts and reddish or brown on the inner parts. It can survive the high salinity content of the Nullarbor soil, and relies on a host plant for their water requirement.

Traditionally, the Quandong is an important food source for Australian Aborigines. The fruit is considered a suitable substitute for meat, especially when game is in short supply. Aborigines also valued the plant for its medicinal properties: its roots are used to treat rheumatism, its leaves to treat skin sores and boils. The oil from the Quandong fruit, extracted from its kernel, is used to treat skin disorders.

Quandongs are also commonly known as “wild” or “desert” peaches. The fruit makes for a wonderful ingredient for a number of dishes. Check out this post for suggestions on how to cook the Quandong fruit!

At one glance, this species of grass might seem uninteresting. The Spinifex triodia, is one of those well-adapted species of plants growing in the Nullarbor, with a very low water requirement.

The porcupine grass has awl-shaped, tough leaves (high in silica) that can break off the skin and cause infections. Traditionally, resin is extracted from the leaves to form an adhesive (which is important in spear-making), and its seeds were collected and ground to make seedcakes. When burned, the porcupine grass also produces a strong, black smoke—the perfect smoke signal.

If you were thinking of taking a stroll through a porcupine grass meadow—well, I’d probably pop some shoes on.

Australian naturalist Ian Fraser writes: “where there are grasses—especially the spiky hummocks of Porcupine Grass, or Spinifex Triodia—there will be termites in vast numbers.” 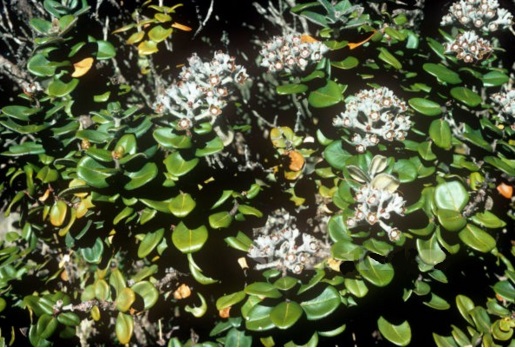 You’ve probably heard of this one. Santalum spicatum, or the Australian sandalwood, is a tree endemic to Southwest Australia. It is a high-value plant, valued for its aromatic oil. It has a similar distribution to the Quandong. It also attaches itself to a host, seeping in the micronutrients it needs to survive.

The tree produces a chemically complex oil with a very distinct scent, which the tree is famous for.

The harvest and export of sandalwood has greatly impacted the Australian economy. At one time, it accounted for more than half of Western Australia’s revenue.

What does sandalwood smell like, exactly? It has a “distinctive soft, warm, smooth, creamy, and milky precious-wood scent.” No wonder it’s in demand!

If you really want to know more about the plants in the Nullarbor and Southern Australia, there are a couple of natural parks that you could visit. These parks are designed for anyone who wants to learn more about plants—if you’re an enthusiast, or traveling with children, and would like to make your trip to the Nullarbor an interesting and educational one, you could add the following places to your itinerary: